Video Capture and Analysis: 5 Reasons to Film Your Research

This blog post is part one of a two-part series on using video records in contextual inquiry.

Design Science researchers almost never go into the field alone—we’re accompanied by a videographer, who may be carrying up to 5 cameras. The ability to film in restricted areas like operating rooms and catheter labs is something that sets Design Science apart, and with good reason: it’s difficult to gain permission to film in an operating room. It requires long-standing relationships with surgeons, physicians, nurses, and the medical facilities they work for. These relationships are built on complicated, time-consuming navigation of hospital approvals, and repeated positive experiences with our researchers and videographers.

To us, the effort of obtaining permission to film in restricted areas is more than worth it: having that video record is invaluable and integral to our research methods.

Perhaps the most obvious benefit of a video record is that it serves as another copy of your field notes. But there are many other reasons to make video capture a major requirement of your research methods.

Here are our top five reasons that we do the extra work to film our site visits.

Having a video record allows the researcher to get opinions and perspectives from our other researchers. We frequently review data and findings with researchers across projects to get fresh perspective and additional insight. Sharing video clips from a site visit is often the most effective way to do this.

A researcher’s notes have already been filtered through their perspective, but sharing the event itself gives our colleagues—who come from diverse professional domains, and often have unique perspectives—the chance to provide their own insights.

4. You can get multiple views of an event at once, including views that the researcher might not have.

Surgeries are often the sites of our contextual inquiries, and operating rooms can present a number of barriers to effective

research. At times the researcher can’t see what is happening at the surgical site, as a result of the distance dictated by the sterile field, and the number of medical staff crowded around the patient.

Our videographers are adept at finding ways to get multiple close views of the surgical site. This means that we can observe the procedure from multiple angles, and the researcher can trust that any parts of the procedure that they could not see will be captured on video, to be reviewed later.

It also means we can use these multiple views to easily juxtapose what the researcher observed—the intensity, or problematic body mechanics, of a clinical task—with the actual clinical task. This juxtaposition is often at the root of our richest insights.

3. You can capture real-world examples of use issues and challenges.

Recorded footage of use issues is often more powerful than summaries of what the researcher observed or anecdotes from participants in the field about those use issues.

Being aware of a particular use issue or challenge doesn’t provide the same understanding as being able to see how and why a use issue occurred, what it looked like, and what the results were. These real-world examples can be reviewed as many times as needed to inform the most effective design choices.

2. You can avoid “missing the gorilla.” 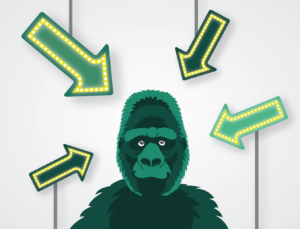 Researchers often develop hunches about important design opportunities early on in a project. This is a useful skill, as it allows us to not waste valuable time chasing red herrings.

But it also can be a major pitfall: inattentional blindness and observer drift act together to result in potentially missing major insights.

Inattentional Blindness: A famous experiment involving a video with a gorilla captures what this term means: researchers asked participants to pay attention to an event in a video. Partway through the video, a woman in a gorilla suit passed through, thumped her chest, and then continued on. Approximately half of participants missed the gorilla—even when looking directly at her. When you’re too focused on a research direction, other use issues or challenges can become invisible. The ability to review footage of a site visit helps us avoid this trick of the human mind.

Observer Drift: In psychology, there are multiple, competing definitions for this term, but here we’re using it to describe the gradual shift in what a researcher focuses on during field research. This can be caused by those aforementioned research ‘hunches,’ or can simply be a result of choosing to focus on what appears most salient in the moment. Being able to review video later gives the researcher a chance to make sure that what they chose to focus on was truly valuable and relevant.

1. You can apply quantitative methods to back up your qualitative findings.

Ultimately, getting video records of a site visit is most important at 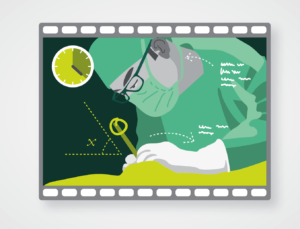 Design Science because we use the video for video analysis. We can quantify and analyze patterns of behavior, speech, gesture, event timing, and many other aspects of processes and device interaction.

This analysis provides weight to the inferences the researcher has made about the challenges of a process, or the use issues of a device. It feeds into our procedure maps and other graphic deliverables, which are used to identify the findings of the research and give concrete evidence for those findings.

Quantitative analysis can upgrade the findings of a contextual inquiry from a list of observations into a set of actionable opportunities.

In part two, we’ll discuss some common mistakes in using video records of site visits, and how to avoid these mistakes.

Planning for the Unplanned: Learnings from Usability Studies Can Inform the Design of Emergency Use Medical Products

Our Chicago office is Open!

Healthcare Providers: We want your input!

What is a Caregiver?

We conduct rigorous research to optimize the usability, safety, and customer appeal of products. Contact us to discuss a project today.